No products in the cart.

You are here: Home > Arran Kassens 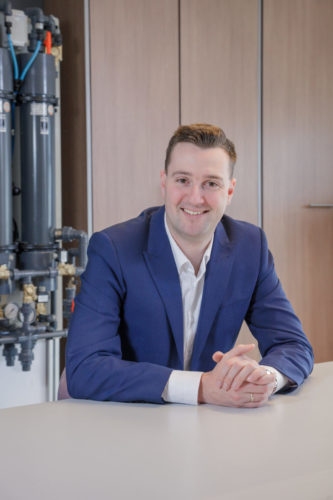 After Arran graduated in 2011 as an industrial product designer at PB International, he actively started working as a salesman for the Dutch market. He grew to be the commercial director and in 2018 had the opportunity to take over the company. He seized that opportunity with both hands!

As fast as he grows businesswise, in private life he is also very fast. Cycle racing through the ‘Achterhoek’ meadows is what he prefers to do during the weekend. To recover afterwards, on the couch, with a great Netflix series.

Arran is short and clear about hobbies: PB International is his biggest hobby.

What does PB mean to you?

Realizing beautiful products and doing it all together, allowing us to grow together on a business and personal level.

When we invited a number of stakeholders to the ‘Zwarte Cross’ festival in Lichtenvoord. Together we got to know each other better in an informal atmosphere. The same actually happens during the visits to the Oktoberfest in Munich. We’ve been there for several years to invite business partners.

Of course Arran only drinks water during these trips …

If one product can be chosen as a favorite, Arran chooses the Legiosafe. This cartridge product is tailor-made for a customer and Arran has experienced this complete process from question to drawing to prototype to end result.

Did you know that Jurjen and Arran used to be classmates? Both graduated as an industrial product designer.

Did you know that Arran did not get a bridal cow, but a bridal chicken? On behalf of the employees, Arran and his wife got two chickens, a chicken mansion and a bacteria-safe chicken drinking water system.

When the fruit for the canteen arrives on Friday, Arran hopes that it will contain sweet strawberries.

If Arran should apply for a second internship within PB, he would like to spend a day in production. In the beginning Arran used to produce some filters, but over the years many things have changed at production level.

Our marina has been helped by PB a number of times in recent years. We suffered from legionella problems and they have tackled this very quickly and professionally by applying their ultrafiltration solutions.

Before the start of the construction process, PB International gave excellent advice on the benefits of ultrafiltration. My wife and I were quickly convinced and are very happy with our choice!

News directly in your mailbox